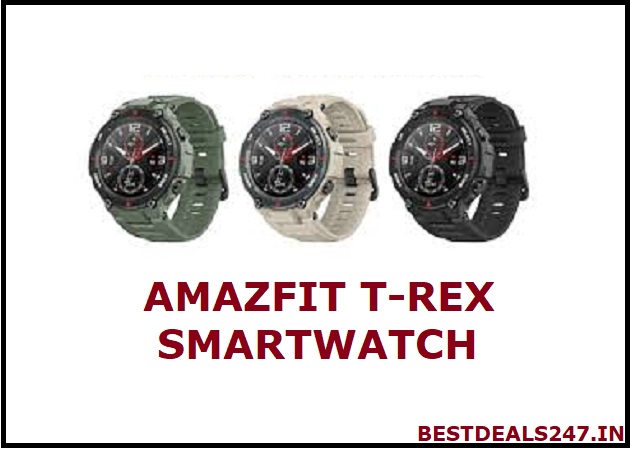 Amazfit has launched its new smartwatch Amazfit T-Rex in the Indian market. The specialty in this smartwatch is the battery used in it, which is capable of giving 20 days of battery life to a single charge. Apart from this, users will get 14 sports modes, which include both indoor and outdoor sports. This smartwatch has been made available on Amazon and the company’s website with the launch but soon it will be available for sale at offline stores as well.

The Amazfit T-Rex has been launched in India with a price tag of Rs 9,999. Users can buy this smartwatch from the company’s official website and e-commerce Amazon. Not only this, but the company has also announced that from next week this smartwatch will be made available for sale at leading offline stores such as Croma, Reliance Digital, and Poorvika Mobiles.

Looking at the design of the Amazfit T-Rex smartwatch, it has been introduced with the military standard design. This device is manufactured from polymer materials. It has been launched in Como Green, Gun Gray, Army Green, and Khaki Color variants.

The Amazfit T-Rex has a 1.3-inch AMOLED display with 360×360 pixels screen resolution that is coated with Corning Gorilla Glass. The specialty of this smartwatch is the 390mAh battery given in it and the company claims that it is capable of giving 20 days of battery life in daily use mode. This smartwatch takes only 2 hours to be fully charged. This device is 5ATM water-resistant i.e. users can use it in water up to 50 meters. The weight of this smartwatch is 58 grams.
Like other features, the Amazfit T-Rex has 14 sports modes, including outdoor and indoor modes. At the same time, users will also get the facility of an optical heart rate sensor (PPG), 3-axis accelerator, geomagnetic sensor, and ambient light sensor. It also monitors durations and data during smartwatch exercise. Apart from this, you will also get notifications of calls, messages, and weather, etc.