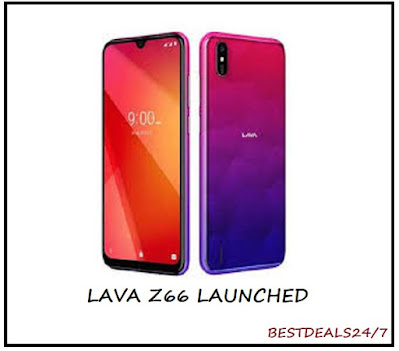 Recently, the Indian government had banned 59 Chinese apps, after which Indian users are now getting attracted to Made in India apps and smartphones. In such a situation, Indian phone manufacturers will also not let this opportunity go by hand and the same category of Indian phone manufacturer Lava has launched low budget smartphone Lava Z66 to compete with Chinese brands. This smartphone has been listed on the e-commerce website Flipkart where information about all its specifications and features has been given.

Price and Availability of Lava Z66:

The Lava Z66 has been launched in the Indian market in a single storage. It costs Rs 7,777. It has 3GB RAM and 32GB internal memory. This smartphone is available in red and blue color variants. With the launch, the company has also made it available for sale. However, no information about the Lava Z66 is currently available on the company’s official website.

This smartphone of the low budget range has a 6.08-inch HD + display. Its screen resolution is 1560 x 720 pixels and it has a 19: 9 aspect ratio. Apart from this, the phone has a 2.5D curved screen. This smartphone works on the octa-core Unisoc processor which comes with 1.6GHz.
The storage given in Lava Z66 can be expanded up to 128GB with the help of a MicroSD card. For photography, it has a dual rear camera setup. The primary phone is 13MP, while the secondary sensor of 5MP is present. Camera features include beauty mode, HDR mode, panorama, night mode, time-lapse, slow motion, and filters, etc. At the same time, the phone has a 13MP front camera for video calling and selfie facilities. For power backup, it has a 3950mAh battery.
Spread the love
Flipkart, Smartphones