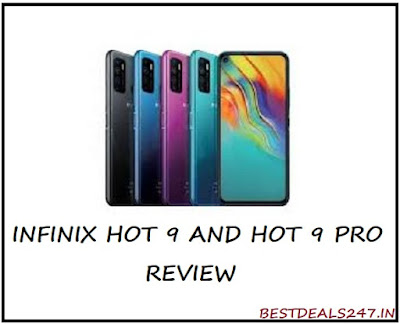 First, we talk about the phone’s display and design. This smartphone comes with a 6.6-inch HD Plus display. The phone has a punch-hole display panel. The screen-to-body ratio of the phone’s display is given 90.5 percent and the aspect ratio is given 20: 9. On the phone, you will get an experience of an edge-to-edge display. In this, you can watch an online video with a brightness of 480 nits.
Being an ultra-budget smartphone, I would like to give full marks to its display. On the phone, you will get access to HD Plus content with a 60Hz refresh rate. However, you may have to compromise the graphics during gaming in it. The overall display is fine and it can be a better alternative to Chinese smartphones.

Talking about the design, the quad-camera set-up is given in its back. Also, it has an LED flash. A camera size of square size is given in the back of the phone. The rear-mounted fingerprint sensor can be seen upwards along with the camera set-up. Dual SIM card slots are provided on the left side of the phone. Apart from this, an external memory card slot has also been given. At the same time, power buttons are provided with right and volume rockers. The micro USB charging port, 3.5mm audio jack, and speaker grills are provided on the underside of the phone. The design of the phone is also fine, with 2D glass finishing in its back panel. At the same time, 2D curved glass finishing with a large screen is seen in the front panel.

Talking about the performance of the phone, it comes with a 12nm MediaTek Helio P22 octa-core processor. It has RAM of 4GB and internal storage of 64GB. The internal storage of the phone can be increased to 256GB via a microSD card. This smartphone comes with XOS 6.0 based on Android 10. To give power to the phone, a powerful battery of 5,000mAh has been given. Also, it has an experience of DTS-HD surround sound.
The phone runs on Android 10, due to which you get additional security in it. However, its XOS 6.0 user interface is not so good but in this, you will get apps properly arranged. If the battery of the phone is strong, then after charging once, you can use it comfortably one day. Due to the 12nm processor, sometimes you can get the problem of lagging in it. However, for basic users who use fewer apps, there will be no problem in this.
Also Read: Infinix Hot 8

Users like to buy phones only by looking at the camera of smartphones. Talking about its camera, it has a quad rear camera set-up. The primary sensor of the phone has been given 48MP. Apart from this, a 2MP depth sensor, 2MP macro sensor, and a dedicated low light sensor have been given on the phone. The phone has an in-display punch-hole camera for selfies. In which an 8MP sensor has been used. There is a quad-camera as well as a quad-LED flash in the back of the phone.
It is nowadays common to have a 48MP camera in an ultra-budget range smartphone. Budget smartphones of many smartphone manufacturer companies now have a 48MP AI quad-camera. A good picture can be clicked in the daylight with the phone’s primary sensor. At the same time, due to the dedicated low light sensor, the picture can be clicked properly in the low light from the phone. Its selfie camera also will not disappoint you.

The Infinix Hot 9 Pro is priced at Rs 9,999. According to this price range, you can call it a power-packed budget smartphone. The phone has a 48MP quad-camera. Also, the finishing of the phone is quite good. Due to the large screen, there is a good experience in watching videos on the phone. Also, the phone has a strong battery that users may like.
Spread the love