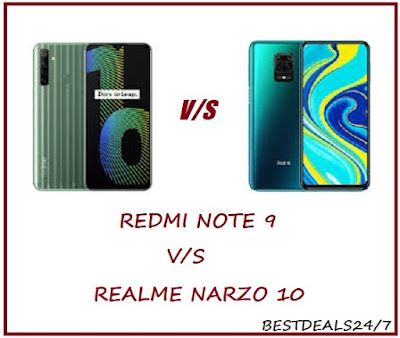 Redmi has recently launched its new smartphone Redmi Note 9 in the Indian market. Which is the company’s first smartphone that has been introduced on the MediaTek Helio G85 processor? This smartphone of the budget range has a quad rear camera setup and a powerful battery. But it is not so easy to make a place in the market. Because Realme Narzo 10 already exists with quad rear camera setup in this budget range. Which can give a tough competition to Redmi Note 9? Due to the similar price of both the smartphones, it will be a little difficult for the users to select one of these and in such a situation we can help you. Here we will tell you how much difference is there in the specifications of Redmi Note 9 and Realme Narzo 10 Which smartphone will be best for you?

Both smartphones are priced at Rs 11,999. Apart from Amazon, Mi.com, and Mi Home, users can also buy Redmi Note 9 from retail stores. Its sale started on July 24. At the same time, Realme Narzo 10 is being made available through the flash sale on the company’s official site and e-commerce Flipkart.

The quad rear camera setup has been given in Redmi Note 9. The primary sensor of the phone is 48MP. While 8MP ultra-wide-angle, 2MP macro lens, and 2MP depth sensor are present. At the same time, for the convenience of video calling and selfie, it has a 13MP front camera.
In Realme Narzo 10, users will get a quad rear camera. It has a 48MP primary sensor, 8MP wide-angle, 2MP portrait lens, and 2MP macro shooter. While its front camera is 16MP. In the case of the front camera, Realme Narzo 10 can be said to be better of these two, because, with its help, users can click spectacular selfies.

The battery section is very important for any smartphone user because nowadays, due to more usage, the battery runs out quickly and in such a situation, smartphones with large batteries are in demand. Keeping this in mind, the Redmi Note 9 has a 5020mAh battery that comes with 18W fast charging support. At the same time, Realme Narzo 10 has a 5000mAh battery with 18W fast charging.

Both smartphones are capable of giving tough competition to each other in terms of specifications. Where Realme Narzo 10 leads in design and selfie camera bet. At the same time, Redmi Note 9 wins in the race for the processor and better battery backup.
Spread the love
Smartphones