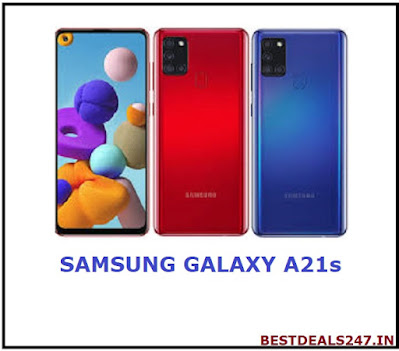 Talking about the display of the Galaxy A21s, it has a 6.5-inch Infinity-O display that comes with HD + resolution. The phone has an edge-to-edge display, which gives full-screen experience in browsing video content. The brightness of the display is also quite good and it also gets 16M color depth. The phone has a PLS TFT LCD display with a resolution of 720 x 1600. Talking about the design of the phone, it has a glossy holographic finish, which improves its look. Smooth curves have been given in its body, which does not cause any problem in gripping. The phone weighs 192 grams, which does not even feel heavy.
The back panel of the phone has a quad rear camera set-up, as well as rear, mounted physical fingerprint sensor. The design of the phone’s camera is similar to that of other smartphones in this series launched this year. A camera set-up in rectangular size has been given on the phone. The phone has an LED flash upwards with the camera. The SIM and memory card slots are given on the left side of the phone. At the same time, the right and power buttons and volume rockers of the phone are given. The phone has a USB Type C charging jack, 3.5mm audio jack, and speaker grills at the bottom.

Talking about the processor, this company comes with an in house Exynos 850 chipset that works on 8nm processing technology. The phone comes in two storage options 4GB RAM + 64GB and 6GB RAM + 128GB. The phone’s storage can be increased to 512GB via a microSD card. The phone has an octa-core processor, which works smoothly in multi-tasking. Talking about the gaming experience, you can play high-definition games on it, but sometimes there is an issue of lagging.
The phone runs on OneUI 2.0 based on Android 10. The phone has a powerful battery of 5,000mAh. Dolvi Atmus feature has been provided for sound performance on the phone. Talking about overall performance, you can have a better experience with gaming as well as multi-tasking. You will also get a better experience in browsing video content on the phone. It takes 1 hour for the phone to be fully charged. Once you charge the phone, you can use it comfortably for one to one and a half days.

Talking about the camera features of the phone, it has a 48MP primary camera, which has an aperture f / 2.0. Apart from this, an 8MP ultra-wide sensor has been given, which has an aperture f / 2.2. The phone has a 2MP depth sensor and a 2MP macro sensor. The aperture of both these cameras is f / 2.4. The phone has a 13MP camera for selfie, which is integrated with punch-holes. The phone’s selfie camera has an aperture f / 2.2.
Video can be recorded at 30fps in full HD resolution from the phone’s rear camera. The resolution of the recorded video will be 1920 x 1080 pixels. At the same time, HD video calls can also be done with a selfie camera. The phone does not have autofocus, as well as night mott and front flash, which may disappoint you.
Its cameras are much better for social media uploads. You can upload social media by clicking better selfies. Also, slow motion and the ultra slow-motion video recording can also be done from the rear camera of the phone. The phone has a Knox Security feature, which secures your photos and files.

The Galaxy A21s comes in two storage options 4GB RAM + 64GB and 6GB RAM + 64GB. The base variant of the phone costs Rs 16,499 and its high-end variant costs Rs 18,499. The phone can be purchased in three color options Black, White, and Blue. The phone will not disappoint you according to the camera and performance. In this, you will get a better experience from social media uploads to video calling. Also, it has a strong battery. It can become a better option for Chinese budget smartphones.