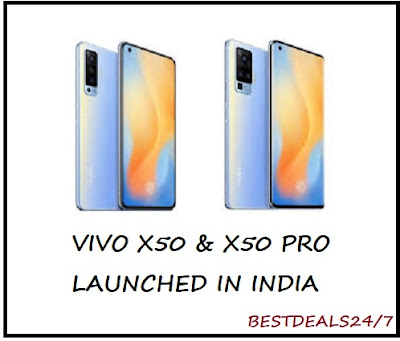 The Vivo X50 smartphone has a 6.56-inch full HD AMOLED display, which will have a refresh rate of 90hz. The phone will come with Snapdragon 765G Soc processor, which will be based on Android 10 based latest FunTouchOs. The quad-camera setup has been given on the rear panel of the phone, whose primary camera will be 48MP, while the other three cameras will be 13MP, 8MP, and 5MP, while the rear camera will be 32MP. Also, a 4,200mAh battery will be available, which will come with 33W fast charging support.

The Vivo X50 Pro smartphone is the top-end model of Vivo X50, which comes with a 6.56-inch full HD AMOLED display. Its refresh ratio will also be 90 Hz. Also, this phone will come with Snapdragon 765G processor. Quad cameras will be provided on its rear panel. The phone will be based on Android 10. Four cameras will be provided on the rear panel. Its primary camera will be 48MP. At the same time, the remaining three cameras will be 13MP, 8MP, and 8MP, while a 32MP camera will be provided for the selfie. The phone will have a 4,315mAh battery for power backup, which will come with 33W fast charging. An in-display fingerprint sensor has been given as security features on the phone.
Spread the love
more
Smartphones