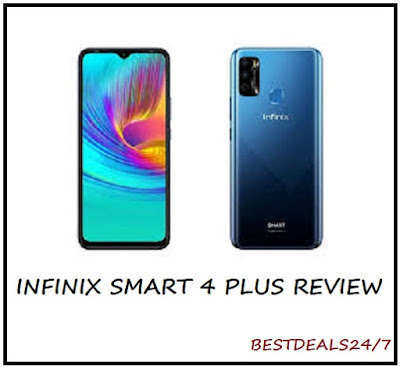 First of all, we talk about the design of the phone, then it gets to see the latest camera set-up along with the big screen. Like the Hot 9 series, it has a square design camera module, with dual camera set-up and triple LED flash. A physical fingerprint sensor is seen in the back panel of the phone.

There are many upgrades in this series as compared to the previous model. The phone looks quite colorful. These three color options come in Midnight Black, Violet, and Osan Web. Gem cut texture design has been given in the back panel of the phone, which looks quite attractive. Also, it has a unibody 2D glass finishing. Looking at the back panel, it seems to be a mid-range device.

The USP of Smart 4 Plus is also its big display. In this, you will get a better experience of video browsing on the OTT platform. Gaming lovers also get gaming experience in large displays. I have experienced an OTT app on this smartphone. The HD resolution content is very good to watch in the cinematic display. According to this price range, you get better quality in a larger display.

Now let’s talk about the performance of the phone. This smartphone comes with 3GB RAM + 32GB storage capacity. Its internal memory can be expanded up to 256GB via a microSD card. A multifunctional fingerprint sensor has been given in the back of the phone. Through its fingerprint sensor, you can also click on the picture after making settings in the camera. That is, along with unlocking the device, it will also help you click selfies.

This smartphone runs on MediaTek’s latest Helio A25 octa-core processor. It has a 12nm processor that works at 64-bit and 1.8GHz processing speeds. Another special feature of the phone is that it is dual 4G VoLTE as well as VoWiFi enabled. Apart from this, the phone has a strong battery of 6,000mAh. Apart from this, the phone comes with DTS surround sound feature. Because of which the user gets better music experience. The phone also has a Fast Unlock feature that can unlock the device in 0.3 seconds. The phone runs on the XOS 6.2 customized operating system based on Android 10.

Its other performance features are average. Due to a lack of RAM in the phone, multitasking can sometimes be a problem. However, the phone works smoothly. Its battery capacity is excellent. According to the company’s claim, once the phone is fully charged, it gets 23 hours of video playback. Apart from this, up to 44 hours of music playback, 15 hours of gaming time, 23 hours of web surfing time, 38 hours of 4G talk time, and 31 days of standby time are available. After charging the phone once, I used it for two days. However, the phone takes 4 hours to be fully charged. It did not like the same thing that nowadays the USB Type C feature is also available in budget smartphones. It has a Micro USB feature. It also does not support fast charging. Because of which the phone takes longer to be fully charged. Apart from this, there is no such flaw in performance. 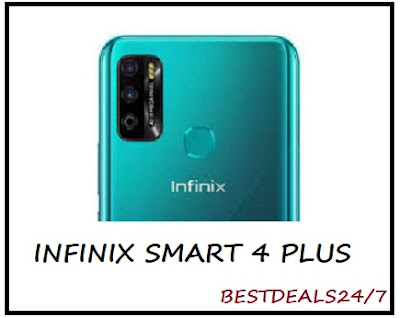 Talking about the camera features of the phone, AI dual camera set-up has been given in its back. Also, it has a triple LED flash feature. The phone has a 13MP primary sensor, which has an aperture f / 1.8. Apart from this, the phone has a 2MP secondary camera. Talking about the selfie camera, it has an 8MP selfie camera, which has an aperture f / 2.0.

Several modes have been given in the rear camera of the phone, including AI beauty mode. At the same time, talking about the selfie camera, it is capable of capturing AI HDR selfies. The selfie camera has AI Beauty 3.0 with customized beauty effects. Which can cover 18 angles separately? Apart from this, it has been given a portrait mode and a wild selfie mode.

Talking about the overall camera, a better picture can be clicked from its rear camera. With this, HD quality videos can also be shot. At the same time, a photo taken with a selfie camera is better for social media uploads. According to this price range, the camera of Smart 4 Plus has impressed us. In particular, due to the HDR feature in its selfie camera, a better and more clear selfie image can be clicked.

If the overall analysis of Infinix Smart 4 Plus is done, then it can be called a valued for money smartphone at a price of Rs 7,499. It has a better design and a premium look. Also, due to the large display, you can experience movies and gaming even more comfortably. The battery of the phone is tremendous, once charged you can forget the charger. However, this is the average in multi-tasking. Also, we did not like its customized operating system. It could have been improved further.