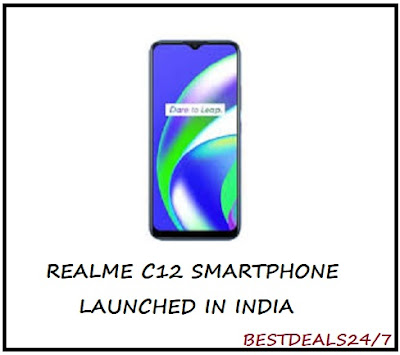 Realme has officially launched Realme C12 in the Indian market by including a new smartphone in its C series. Whereas before India it has been launched in Indonesia. Realme C12 has also been launched in the market like other smartphones of C series with a low budget range and great specifications. In this smartphone, users will get a 6000mAh battery. The company claims that the battery is capable of providing a standby time of 57 days and a calling time of 46.04 hours in a single charge. Let’s know about the price and specifications of this smartphone …

Realme C12 has been launched in the Indian market in single storage variants and is priced at Rs 8,999. It has 3GB RAM and 32GB internal storage. Users will be able to buy in their Power Blue and Power Silver color variants. The smartphone’s sale on Flipkart and realme.com will start on August 24. Whereas at offline stores, it will be made available for sale from August 31.

Realme C12 has a 6.5-inch Mini Drop HD + display. Which comes with 1600 x 720 pixels screen resolution. Its aspect ratio is 20: 9 and screen to body ratio of 88.7 have been given. The screen of the smartphone is coated with Corning Gorilla Glass. For security, users will get the facility of the rear fingerprint sensor. This smartphone runs on a 2.3GHz Octa-Core MediaTek Helio G35 processor and users can expand its storage using a microSD card.

Realme C12 is the company’s budget range smartphone and has a triple rear camera setup. The primary camera of the phone is 13MP. While a 2MP monochrome sensor and a 2MP macro lens are present. At the same time, the phone has a 5MP front camera for selfies. It has a 6,000mAh mega battery available for power backup which is capable of providing great backup.