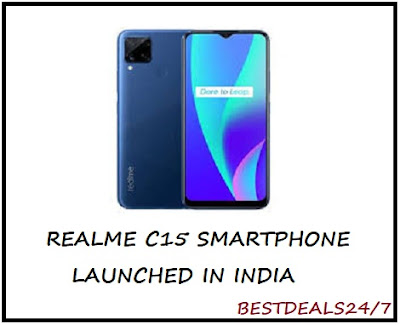 Chinese smartphone manufacturer Realme has launched its latest smartphone Realme C15 in India. The phone will come in two storage variants of 3GB + 32GB and 4GB + 64GB. The phone’s 3GB RAM 64GB storage variant is priced at Rs 9,999, while the 4GB RAM 64GB storage variant will be priced at Rs 10,999. The company has introduced Realme C15 in two color options Power Silver and Power Blue. The first sale of Realme C15 will be on August 27 at 12 noon. Customers will be able to buy the phone from Realme.com and Flipkart. Apart from online sales, Realme C15 will be available for offline sales from September 3.

Realme C15 has a 6.5-inch HD + display, which has a resolution of 720×1,600 pixels. The phone’s display ratio is 20: 9, while the screen to body ratio is 88.7. Like the Realme C12, the Realme C15 smartphone comes with dual SIM connectivity. This phone will work on Android 10 based on Realme UI. Talking about the processor, the phone will get the Octa-core MediaTech Helio G35 SoC, which will get 4GB LPDDR4x RAM support.

There will be a big difference in the camera of Realme C12 and Realme C15. Quad camera setup will be found in the rear of the Realme C15 smartphone. Its primary lens will be 13MP, which will come with f / 2.2 aperture. The same secondary lens will get 8MP support, which will come with an f / 2.25 ultra-wide angle. This will provide a 119-degree field of view. Apart from this, a 2MP monochrome sensor will come with an f / 2.4 lens. The same 2MP lens will be available. An 8MP lens has been provided for selfies and videography.

With the help of a microSD card of storage of Realme C15 smartphone, it can be increased to 256GB. 4G VoLTE, Wi-Fi, Bluetooth V5.0, Micro-USB have been provided as connectivity. The rear-mounted fingerprint sensors will be available for phone security. The phone will get a 6000mAh battery for power backup. The dimensions of the phone will be 164.5×75.9×9.8mm and weight 209 grams.