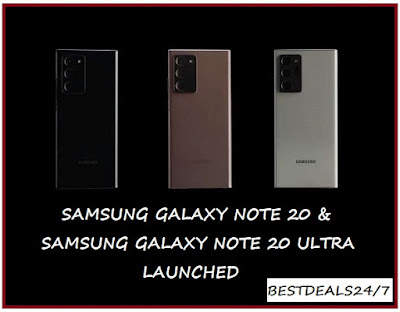 Samsung Galaxy Note 20 has a Full HD + Super AMOLED Infinity-O display with a screen resolution of 2400 x 1080 pixels. This smartphone works on the Samsung Exynos 990 chipset. But in China and the US, it has been introduced with the Snapdragon 865+. MicroSD card slot was not provided in this smartphone. For photography, it has a triple rear camera setup with an LED flash. It has 12MP primary camera, 64MP secondary camera, 12MP ultra-wide sensor. While the phone has a 10MP selfie camera. For power backup, it has a 4,300mAh battery, which comes with 25W fast charging support.

The Samsung Galaxy Note 20 Ultra has a 6.9 inch Quad HD + Dynamic Amoled Infinity-O display whose screen resolution is 3200 × 1440 pixels. It has 120Hz refresh and Corning Gorilla Glass 7 protection. Its processor is similar to the Galaxy Note 20. But it has a microSD card slot and users can store up to 1TB of extra data. It also has a triple rear camera setup. But its rear camera is 108MP. While a 12MP periscope lens and a 12MP ultra-wide sensor have been given. The front camera is 10MP. For power backup, it has a 4500mAh battery with 45W fast charging support.
Spread the love
more
Smartphones