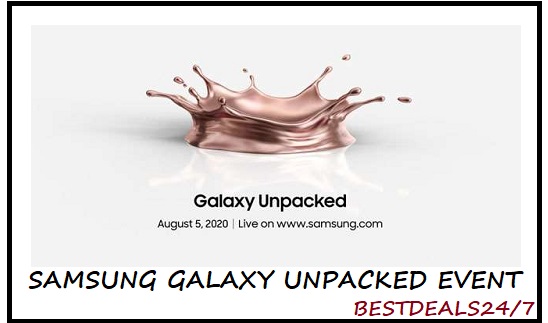 Samsung is going to host its first virtual Galaxy Unpacked Event 2020 today. Due to Coronavirus, the South Korean smartphone maker can present its premium Galaxy Note 20 series and Galaxy Fold 2 at an event organized in a virtual way. This event will be organized at 7:30 pm Indian time. The event will be broadcast through the company’s official social media handles and channels. The company has also released a live stream link for this.
This is Samsung’s second Galaxy Unpacked event to be held this year. Earlier in the year, the company launched the Galaxy S20 series and the Z Flip foldable smartphone at the Galaxy Unpacked Event 2020. Apart from the company’s social media handle, you can also live stream this event through the company’s official website.

Which devices can be launched?

In addition to its premium devices, Samsung Galaxy Unpacked Event 2020, the company can also introduce many more smart gadgets and devices. Possible devices to be launched in this event are-

Let us first talk about the company’s upcoming Note series. The company can launch three devices Note 20, Note 20+, and Note 20 Ultra in its new Note 20 series. Devices in this series can be offered with 4G and 5G variants. Several leaked information about the base model of the Galaxy Note 20 series has been revealed earlier. The phone can be offered with a centrally aligned punch-hole display and triple rear camera set-up. Upgraded S-Pen can be given in this series of devices.