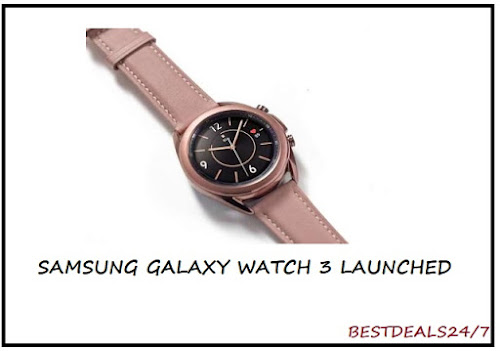 Like every year at the Samsung Galaxy Unpacked event, this time the company has also introduced new smartphone series as well as many other devices, including the Galaxy Watch 3. Samsung Galaxy Watch 3 has been launched in two variants LTE and non-LTE. Apart from this, users will be able to buy in two different sizes. The most special feature in this smartwatch is the SpO2 sensor given in it. Also, this watch is IP68 water resistance and comes with GPS support.

The 1.4mm AMOLED display has been given in the 45mm model of Galaxy Watch 3 whose screen resolution is 360 x 360 pixels. At the same time, its 41mm model has a 1.2-inch AMOLED display with a screen resolution of 360 x 360 pixels. All other features are the same. The screen of both variants is coated with Corning Gorilla Glass DX and supports Android 5.0 or above. It also works on the iOS version and supports iOS 9.0 or above. That is, users can use it on iPhone 5 and all subsequent iPhone devices.
This smartwatch works on the Exynos 9110 chipset and has 8GB internal storage with 1GB of RAM. It has features like Bluetooth, GPS, WiFi, and NFC. As a special feature, users will get 39 sports modes, ECG, heart rate tracking, and sleep monitoring in the Galaxy Watch 3. This smartwatch is IP68 certified and users can use it comfortably in 50 meters of water for 10 minutes. The 45mm model has a 247mAh battery and the 41mm variant has a 340mAh battery.
Spread the love
Mens Grooming