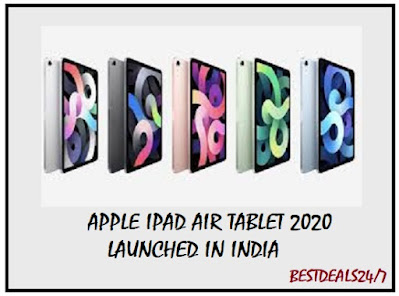 Apple has launched the iPad Air tablet in India. It has been introduced in India for Rs 54,900. This is the price of the Wi-Fi variant of the tablet. Also, the Wi-Fi + Cellular variant will come to India for Rs 66,900. The iPad Air has been introduced in 5 color options Silver, Space Gray, Rose Gold, Green, Sky Blue. The tab is offered with two models Wi-Fi and Wi-Fi + Cellular models and two storage variants 64GB and 256GB. The company has claimed that the LTE variants of the iPad Air will also be made available for sale.

The iPad Air tab will be available for sale from next month. Talking about accessories, the latest Apple Pencil will be supported with the iPad Air, which will be magnetically attached to the tab. Customers will have to pay 299 dollars separately for the Magic Keyboard and Apple pencil.

Apple’s new 8th generation Apple iPad will come with the company’s exclusive Apple Pencil and 10.9-inch liquid display. Its resolution will be 2360/1640 pixels. It will come with fully laminated True Tone support and anti-reflective coating. A14 Bionic chipset has been used in it, which will get the support of 6 core CPU along with a 5nm chip. It will run on iPadOS in tabs. It will get an amazing gaming experience. The new tablet will be 6 times faster than the top-selling phone. It will come with All-Day Battery Life. The iPad Air has been introduced with improved graphics. The new iPad Air has been introduced with a 4-core GPU from Apple. Apple claims that it is the most advanced chipset.

A 12MP camera will be available on the rear panel of the iPad Air tab, which will come with a video stabilization feature. Also, the front has a 7MP Face Time HD camera for selfie and video conferencing, which will be able to capture HDR and 1080 pixels at 60 frames per second. For connectivity, the iPad Air has a USB-C type, which will support 20W charging. It will also be able to transfer 5Gbps data. The tab will come with Wi-Fi 6 connectivity. The fingerprint sensor is given in the power button of the tab.