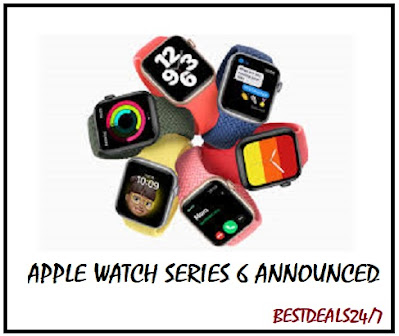 Legendary tech company Apple has launched the much-anticipated Apple Watch Series 6 at the Time Flies event. Blood oxygen feature has been given in this series watch, through which users can detect the amount of oxygen in the blood in just 15 seconds. Apart from this, sensors have been provided in this watch from heart rate to sleep monitor. So let’s know about the price and specification of the Apple Watch Series 6 …

Apple Watch Series 6 comes with Always-On Display. There are many watch faces in this watch, including many faces like GMT, Countdown, and Mimoji. Along with this, the family feature has been given in this watch, through which users can set their children’s Apple Watch with the help of their iPhone. Apart from this, this watch has got the support of 10 sport modes. At the same time, this watch works on the latest watchOS 7 operating system.

The company has given blood oxygen feature in Apple Watch Series 6. Through this feature, users can detect the amount of oxygen in the blood in just 15 seconds. Talking about other features, users will get the facility of call notifications in this watch.

Apple Watch Series 6 has an S6 processor, which is 20 times faster than the chipset given in the first launched watch. Apart from this, keeping in mind the increasing effect of corona infection, this watch also has a hand-wash feature.

Let us tell you that the company launched Apple Watch Series 5 last year. Talking about this watch, it has been introduced in two sizes 44mm and 40mm. Both size variants are 10.7mm thick and have a digital crown with haptic feedback. Apple Watch Series 5 has new dual-core S5 processors from Apple. It is twice faster than the S3 processor used in its previous variants. W3 chip has been used for wireless connectivity in it.

It has 32GB of storage. It has an Always-On Retina Display with LTPO OLED technology, which has a screen from 60 Hz to 1 Hz refresh rate. The brightness of 1,000 nits has been given in its Always On Retina Display. The pixel resolution of its display is 368×448. Apple Watch Series 5 features an electric heart rate sensor, built-in compass, barometric altimeter, accelerometer, and ambient light sensor. It also has an International Emergency Calling feature.