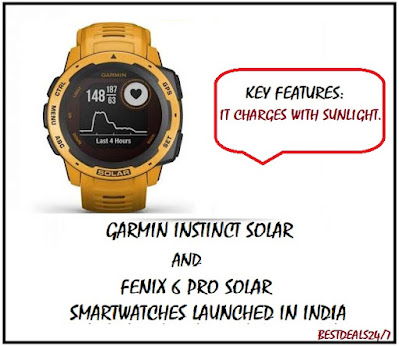 Smartwatch maker company Garmin has launched its most exclusive Garmin Instinct Solar and Fenix 6 Pro Solar smartwatches in India. The specialty of both these latest smartwatches is that they are charged with sunlight. Apart from this, sensors to monitor heart rate, sleep and stress have been given in both these watches. Also, both the watch has got support modes like climbing and mountain biking. At the same time, the company says that we have prepared a special type of power glass for these watches. This glass is made with a thin multilayer structure, which is charged even after being fully covered.

The black color variant of the Garmin Fenix 6 Pro Solar smartwatch is priced at Rs 89,990. At the same time, the Cobalt Blue color variant with its Whitestone band is priced at Rs 99,990. Both these latest smartwatches can be purchased from the company’s official site and e-commerce sites like Amazon India, Flipkart, and Paytm Mall.

The Garmin Instinct Solar smartwatch has a SpO2 tracker, through which users can detect the amount of oxygen in the blood. Apart from this, users will get the power manager feature in this watch. At the same time, the company claims that the battery of this smartwatch provides 50 days of battery backup in solar exposure mode along with 24 days of battery backup.

Garmin’s Fenix 6 Pro Solar smartwatches are equipped with features such as solar charging lens and power manager. Sport modes like mountain biking and climbing have been given in this watch. Apart from this, users will get a strong battery in this smartwatch, which provides 14 days battery backup in normal mode and 16 days in solar exposure mode.