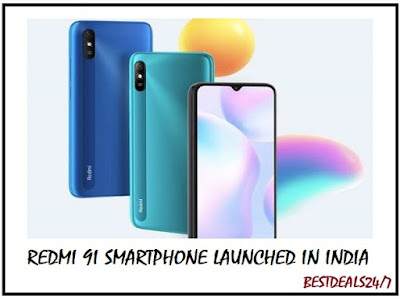 There is good news for Indian users waiting for Redmi 9i that the company has officially launched this smartphone. In the mid-budget range of Redmi 9i smartphones, users will not only get a strong battery but will also get powerful performance capability. It has been introduced on the MediaTek Helio G25 processor and the battery used in it can give a backup of two days.

Redmi 9i Price and Availability:

Specifications of Redmi 9i:

Redmi 9i has a 6.53-inch HD + LCD display, which has an aspect ratio of 20: 9. Introduced on Android 10 OS, this smartphone works on the MediaTek Helio G25 processor. It has the facility of 4GB RAM and is available in two storage variants. Apart from this, the storage of the phone can be expanded up to 512GB using a microSD card.

5,000mAh has been given for power backup in Redmi 9i, which comes with 10W charging support. The phone’s battery is capable of providing 31 hours of calling, 162 hours of music play, and 11 hours of gaming in a single charge. For photography, users will get a 13MP single rear camera setup in it. While the front camera is 5MP. For connectivity, it has features like Bluetooth 5.0, micro-USB port, and 3.5mm headphone jack.