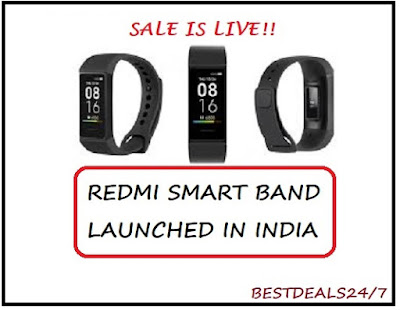 The Redmi Smart Band has a 1,08-inch TFT LCD display, which is larger than the Mi Band 4 in display size. The screen resolution of the Redmi Smart Band is 128/220 pixels. Let us know that the screen size of Mi Band4 is 0.95 inches. An optical sensor has been provided in the Redmi Smart band, which can perform heart rate monitoring for up to 24 hours. It comes with 5 professional modes such as sleep monitoring, optical heart rate sensor, and step tracker. It also has a 5ATM rated water resistance. Meaning the smart band will not deteriorate in 50 meters deep water for 10 minutes. There will be more than 50 watch faces in Redmi Smart Band, which users will be able to customize to their liking. Music control has been supported in this.

Redmi Smart Band will support Rise to Wake gestures. Meaning messages and other notifications can be seen without pressing the button. Redmi Smart band has claimed to have 14 days of battery life in single charging. Redmi’s new wearables come with USB plugs. Meaning external charger will not be required to charge Redmi Smart Band. Also, it can be fully charged in just two hours. The reason for the Redmi Smart Band is 13 grams.