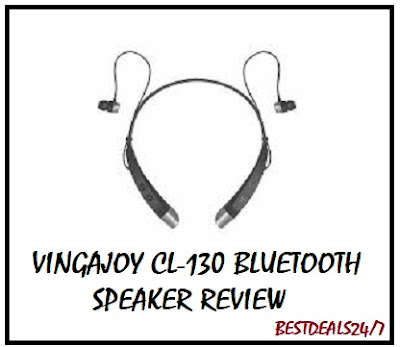 Vingajoy recently launched its Bluetooth neckband Vingajoy CL-130. The neckband is available for sale at Flipkart for Rs 999. These two color options come in black and gray. The company has claimed to have 12 hours of playback backup in the neckband. Also, this product coming in the budget segment has been introduced as Bass Mafia. So let us know whether this product meets the company’s claim in the review…

Talking about the design, the neckband is quite lightweight. But the use of plastic is clearly visible on the neckband. There are buttons on the neckband to reduce and increase the volume. Also, a separate button has been given for calling. With the help of this button, there is an option to forward music. The front of the neckband is in bullet style, introduced with magnetic support. The neckband is designed in this style so that the earphones can be easily placed in the bullet space. The USB Type-C charging point is not provided in the neckband. Also, no charger is available with the phone for charging. In such a situation, the customer will need an extra charge to charge the neckband. According to me, the Vingajoy CL-130 is an average designed neckband, which you don’t expect for premium quality. The best thing about this neckband is that its wire is very long so that two people can enjoy music easily with one neckband.

The neckband has a built-in mic, which is available in almost all wireless headphones. The company has claimed HD sound quality in Neckband. But I found the sound quality of the neckband used to be average. Although the neckband is good in terms of power back. This neckband can be used comfortably for a whole day for a single charge. Also, despite this powerful power back, the phone is quite lightweight. This neckband can be used during sports activity and gym. But it would be better if the neckband was offered in different size buds option. Meaning users can use earbuds in the neckband according to their own. According to me, buying this neckband at a price point under 1000 rupees can be a better option. However, the final decision to buy a neckband should be yours.